Since its inception, Jeff Bezos has been playing the long game at Amazon. He put everyone on notice in his first shareholder letter in 1997: “We believe that a fundamental measure of our success will be shareholder value we create over the long term. We choose to prioritize growth.” Profits took a back seat to growth and early on he took a lot of flak about it, as when Forrester Research analyst George Colony called the company “Amazon. Toast.”

The winning strategy as laid out in that first letter and followed ever since is “customer obsession.” Recognizing that internet shopping was just in its infancy, he understood that it would take time to get consumers who never had an alternative to in-store shopping to come over to Amazon. He took on the challenge of helping customers evolve their shopping habits from the store to online. He basically changed consumers’ behavior with his vision. And the rest is history. 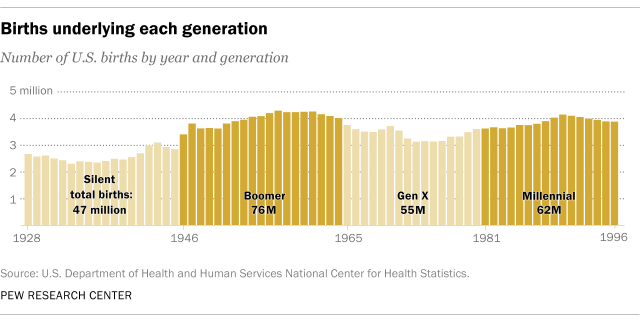 At the time of Amazon’s founding, the oldest millennials were only 16 years of age and Bezos knew they were the target customer on whom his long-range vision for Amazon depended. In the inevitable march of time, millennials surpassed Baby Boomers in numbers in 2019. And because of immigration, their numbers will not even peak until 2033 when they reach 75 million.

Today millennials are between 25 and 40 years of age and just at the lifestage when consumer incomes and spending begin to peak. Boomers, now 57 to 76 years, are going in the opposite direction with income and spending inevitably dropping as they reach retirement age.

Today Bezos’ plan to dominate as the online destination of choice has been realized, most especially among the millennial cohort with its growing spending power. A new study from investment firm Cowen reports over 60 percent of millennial consumers say Amazon is their most preferred shopping channel — bar none. It doesn’t just lead as a destination of choice against other brands or retailers’ websites, but it’s the hands-down favorite over physical stores as well, with only about one-fourth preferring the in-store experience.

And not only is Amazon the favored place for millennials to shop, but it also beats Google as the place where they start their online shopping searches and research for planned purchases, even if they end up buying at some other place. Amazon’s hold on the even younger Gen Z customer is equally as strong, but that is a subject for another day.

Besides being committed to the long game, Bezos also famously said “If we can keep our competitors focused on us while we stay focused on the customer, ultimately we’ll turn out alright.” Bezos has gotten his wish since competitors from Walmart on down are OCD over Amazon.

In an incisive interview with Business Insider, Bezos explained his thinking on the competition: “We had an all hands meeting and I said, ‘Look, you should wake up worried, even terrified every morning, but don’t be worried about our competitors, because they’re never going to send us any money anyway. Let’s be worried about our customers and stay heads down focused.’”

He went on to explain that unlike sports, business is not a zero-sum game where there are winners and losers. “Ecommerce is succeeding. Nobody else has to fail for us to do well.” That is easy for Bezos to say because he keeps winning. But when you keep losing to Amazon, it sure feels like a zero-sum game.

To get on the scoreboard against Amazon, brands need to gain consumer awareness to become a destination people will remember and go to. It comes down to effective marketing so that a brand can reach and draw in the best customer prospects. That means marketing to millennials, who given their position in the consumer lifecycle, are no longer the up-and-comers but the here-and-now best customer prospect for brands.

How to Reach Millennials

To the rescue comes a new study from Data Axle examining the generational shifts in market preferences. Based on a survey among nearly 1,1,00 consumers evenly weighted across Boomer, Gen X, millennial and Gen Z cohorts, what’s intriguing is how distinctive millennials are from the other segments in their marketing preferences. Sometimes they skew along with the younger Gen Z, but at other times they diverge and side with older consumers. And sometimes they stand alone.

For example, a key point of difference is millennials’ preference to hear from brands via email. Nearly two-thirds of millennials favor email communications from brands, the highest across all segments, but older Gen X and younger Gen Z consumers both rank email much lower – 56 percent for Gen Z and 53 percent for Gen X. Boomers also lean toward email, with 58 percent reporting it is their favorite brand communications vehicle. “Email is the new digital address, replacing our postal address,” explains Stacia Goddard, Data Axle’s senior vice president, strategy and consulting. “Now everyone has all their devices connected to it.”

Online advertising scores low for millennials too – only 23 percent like it, the lowest among the four generations. On the other hand, social media gets the pick for 47 percent of millennials, higher than for both Boomers and Gen X but trailing far behind Gen Z at 63 percent. For Gen Z, social media advertising is their favorite marketing channel.

“When you dig down into the data, we find differences between the younger millennials just below 30 years old and the older millennials that are now 40. There is a 15-year span from the youngest millennials to oldest, which makes a big difference in their lifestage,” Goddard explains.

Millennials also stand apart when it comes to the importance of a brand’s reputation. Millennials are least impressed with brand reputation (31 percent) as compared with either Gen Z (42 percent) or Boomers (41 percent). Gen X is in the middle with 36 percent.

“We hear everywhere how important brand reputation and how what they stand for is critically important to millennials,” Goddard explains. “But we found the opposite as we peeled back the layers. That is because they and Gen X consumers are least trusting of brands overall. Every brand seems to be shifting toward social and environmental value positioning, but such values statements must be authentic. Sometimes it seems brands are trying to be what everyone else wants them to be and not being true to themselves. millennials can tell the difference.”

No matter how a brand communicates with consumers, personalization of messaging and offers is critical to their success. Millennials lead here – important to 88 percent of millennials – followed by Gen Z (87 percent), Gen X (82 percent) and Boomers (77 percent).

This is where Amazon has it all over the competition. It knows what customers read, watch on TV, search for, and buy. It’s no surprise then, that Amazon ranks the highest among all brands in customer loyalty in the Data Axle survey. Other highly regarded brands include Nike, Apple, Target, and Samsung.

Brands that want to gain traction with millennials have to make it personal and provide information that really means something to each of them individually. “People have zero interest in connecting with brands they don’t relate to,” Goddard reflects. “Everyone is bombarded by marketing, advertising and promotional messages every day and even more during an election year. The only way to break through is to personalize it for them.” She adds that millennials are happy to receive personal messages from companies they don’t even know, as long as they are interesting and relevant.

Overall, nearly 60 percent of consumers are eager to sign up for a company’s email newsletters to see sales, deals and offers. They are willing to share their personal data so that brands can communicate information that is meaningful to them. “Millennials are willing to give you their data so brands should be able to know enough to personalize it for them. As digital natives, millennials are incredibly data savvy and know how to use it. They expect brands to be equally savvy in using their data effectively to craft personalized messages and offers.”

The days of mass media advertising are truly dead and gone. Today it’s all about personalizing the message. “Customers are complex individuals who want to be advertised to about products that are relevant to them with messaging tailored to their lifestyles, appearing in channels they prefer,” Goddard shares.

Get Into the Game with Amazon

Admittedly, Amazon has a huge lead in the competitive game for millennials’ share of wallet. But the score doesn’t need to be 60 points for Amazon and single digits for the other side. Copying strategies from Amazon’s playbook is called for.

Maybe a brand can’t match Amazon’s price, but a little bit – or a lot – of customer obsession would help a brand put more points on the board, as will aiming marketing through the channels they pay the most attention to. But most importantly, the marketing message must be personalized to make a memorable impression. These steps will give a competitor a better chance to score against Amazon.